I'll start with a remnant of an earlier concept for the game.  Should you fly to the Empire's Northtown, you will see a spinning...something.  Make sure you're in the overhead view to see it clearly. 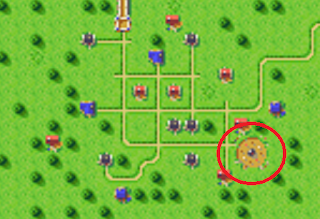 The reason this object stands out is: 1)its size, 2)the fact that it's animated, as hardly anything on the world map is, and 3)the fact that despite its prominence on the map, it is nowhere to be found in the actual town.

So why was it there?  Let's turn our attention elsewhere in the world for a moment: the first chapter of the game.  See the map below:

At the top of this picture is the waterfall from the opening.  Look how the game's, "active view" (as we'll call it for now), lines up almost exactly with what's in the overhead: The overhead map is extremely detailed with respect to what appears in the active view.  Next, let's take our attention to the area I circled in red, which is the kingdom of Pandora:

Notice how once again, this is reproduced almost exactly on the overhead map, in very precise detail.  Clearly, the game designers aimed very high in creating an immersive world with consistent detail across different ways of traversing the game.  Many have speculated that the early game is the most "complete" part, as it seems to be the most intricate and comprehensive portion of the adventure.  Thus, it is not far fetched to conclude that the overhead/active view synchronization was a likely goal for the entire game.  There would be exceptions to this, of course.  Some areas would be more mysterious than others, and random terrain would be needed as a place holder to show size and fill in any gaps.  But in the final game, this is the only part that has this level of detail.

Before we return to Northtown, let's take a look at an example in the opposite direction---the northern ice continent. 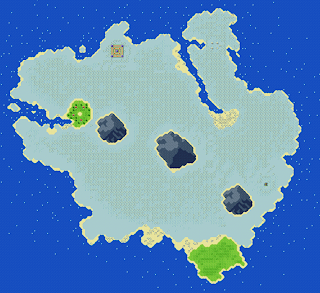 Nothing presented here is even close to what we'd find if we actually land.  The green portion to the south seems to represent some relief from the harsh climate, but attempts to land Flammie there fail.  Similarly, the wilderness that we travel between Todo Village and the Ice Palace is far smaller than what is represented on the map.  In fact, the developers seemed to reuse certain areas in the active view design, with only minor changes.  We'll see later in an early world map that the Ice Country's overhead view was most likely intended to be far more detailed in the final game.

Back to Northtown.  Since the overhead view of the area was designed with the circular object, we can conclude that it was probably excised relatively late in development.  The detail in Northtown's overhead view is more consistent with the beginning of the game than what ended up being the Ice Country above.  Let's take a look at Northtown itself: 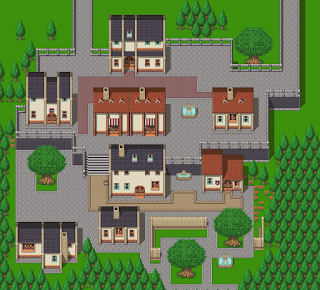 We're presented with nine houses, two of which we can not enter.   These either had a purpose in the original concept or were added for scenery in the final game.

The overhead view of Northtown has sixteen houses.  I'm having trouble matching the overhead concept and the active concept.  It's worth nothing that in contrast to what we've found so far, Southtown's overhead layout is very close to its active layout.  Southtown uses the same tiles as Northtown, and hardly has any content.

The best harmonization I can come up with for the active view and overhead view is this:

The palette of each house is consistent, and little details like the big tree on the left could be represented by the blank space on the overhead map.

Regardless, we can conclude that the circular object was located in the southeastern area of town as it exists in the final game, where there are two trees and a fountain.  It almost appears that these ornaments are the grand entrance to something, but instead, we end up with a road to nowhere.  Flying Omelette attempted to travel out of bounds here, with no success.  There is a passageway in the southern end of Northtown that seems to go nowhere, and blank space at the northern part of town, which is consistent with our assumption that the town is abridged.

A search of the Japanese Script for Seiken Densetsu 2 (their name for Secret of Mana) reveals nothing referring to a wheel or a circle, and it seems unlikely that something that big would be lost in translation.

So what else could it be? The inside of a CD-jewel case?  (you didn't see that coming) It could just be something that Square added in, knowing that 25 years later, many late nights would be spent speculating on what it was they came up with.  Either way, there's not much more we can discover than what is already out there.

For when I could not accomplish what I needed to with the ROM and an editor, I used the Mana and Final Fantasy wiki for game rips.  I also used versions of Galen Puronen's phenomenal work, which you can view here, in addition to the work of FantasyAnime.com, and the Spriters Resource.  All material is owned by Square, and is used under the Fair Use Doctrine.

Be sure to check out the Secret of Mana subreddit at https://www.reddit.com/r/secretofmana/ and its Discord discord.gg/TvAZU2.